A day with Empty Creel Fly Fishing is a day with Bo Goins.

Bo grew up hunting quail and fishing the lakes and streams of Arkansas with his dad. After a 37-year career in agribusiness, Bo decided to change his priorities and spend his time outdoors pursuing his long-time passion for fly fishing.

Having traveled extensively for his business – both in the United States and internationally – Bo brings the experience of many guided fly fishing trips. Bo has traveled from the Alaskan peninsula and western Canada across the United States; from Montana to Colorado to the streams of Vermont and down to the Florida Keys and the Gulf Coast. Bo has even been to the lakes of western Mexico, the saltwater flats of Eastern Mexico, Puerto Rico, Belize, the Bahamas, and down to the Amazon River basin in Brazil.

Over the years, Bo has formed a close friendship with many of the guides he hired for these trips, and that has contributed to making him a much better fly fisher.

However, Bo believes he learned the most from the only three “bad” guides with which he spent a day on the water. “I knew I was in trouble with one guide in Islamorada, Florida,” Bo recalls, “when I realized he had never heard of a bimini twist, and I had to show him how to tie a nail knot.” Bo and his ill-prepared guide still managed to hook up a couple of small tarpon that day. Sometimes, learning what not to do is more important than knowing what to do! The key is not to get in a hurry and miss out on the experience.

Making the full fly fishing progression – from wanting to just catch a fish, to wanting to catch a lot of fish, to praying to catch a big fish, and then catching a lot of big fish – has been a long and enjoyable process for Bo. Now, he takes great pleasure in rowing a drift boat and helping other anglers navigate along the progression of their fly fishing experiences.

Bo knows it really is rewarding to help someone catch a fish on the fly! 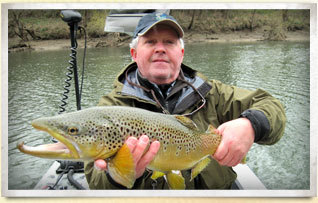 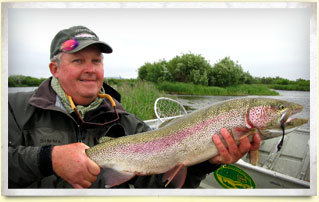