Our home water is the Little Red River below Greers Ferry Lake in Heber Springs, Arkansas.

The Little Red River is a year-round, world-class, tailwater fishery that flows for approximately 82 miles before it meets the White River in east-central Arkansas.  The constant 50-degree cold water from Greers Ferry Lake provides approximately 45 miles of some of the most productive trout water in the United States.  The Arkansas Game and Fish Commission estimates 8,000 trout per mile; many of which are supplied by a year-round stocking program by the AGFC of Rainbow Trout throughout the Little Red River.

There are no Brown Trout stocked in the Little Red River. All the German Brown Trout are entirely wild, and the population is self-sustaining.  Is there another World Record Brown Trout in the Little Red River?  Many fly fishermen of the river believe there is, and a few claim to have actually seen such trophies!  To find out for yourself, book a trip with Empty Creel Fly Fishing Guides and Outfitter, and we will help to get your fly in the water. 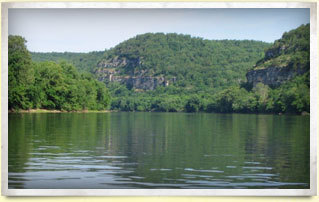